We are Ashoori Law, led by Michael Ashoori, a U.S. immigration lawyer based in Los Angeles, California.  At our law firm we work with clients from all over the world, and we regularly post articles and videos to make sure that you are up to date with the latest immigration news.  If, after reading this article, you have questions, then we invite you to contact us at Ashoori Law.  Feel free to call or text us at +1-818-741-1117 or you may request a free consultation by clicking this link.

Benefit #1:  The Right to Vote

Benefit #2:  The People You Can Sponsor

Another benefit of becoming a U.S. citizen involves the types of family members who you can sponsor for a green card.  As a lawful permanent resident, you would be limited to only certain categories of people who you can sponsor for a green card, including your spouse and your children, if certain conditions are met.  However, as a U.S. citizen, you would be able to sponsor additional classifications of people for a green card, such as your siblings and your parents, provided again that certain conditions are met.

Benefit #3:  Security in Your Status

Your status in the United States is more secure as a U.S. citizen. By contrast,  there are multiple ways that you could lose your lawful permanent resident status.  For example, if you are convicted of certain crimes or if you spend too much time outside of the United States, then you could potentially lose your status as a U.S. lawful permanent resident. 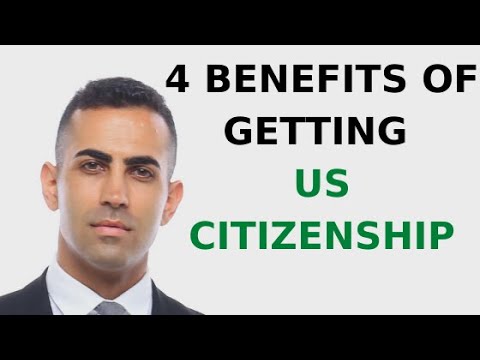 A fourth benefit of U.S. citizenship has to do with fees and expenses.  When you obtain your green card, your status as a lawful permanent resident is typically valid for a period of 10 years.  That means that every 10 years you have to renew your green card.  As you would expect, this requires that you file an application with USCIS.  You may be surprised to learn that the renewal application and the filing fees for that application are pretty expensive.  As of right now, the fees are close to $500, and the fees typically increase over time. Thus, as a lawful permanent resident, you will need to incur a substantial expense each time you renew your green card.  Once you become a U.S. citizen, however, you do not have to apply to renew your citizenship ever.

In sum, we’ve discussed four benefits of becoming a U.S. citizen.  A U.S. citizen can vote, can sponsor additional family members for a green card, has greater security of status, and does not have to expend the costs of renewing a green card every 10 years.

My name is Michael Ashoori and I'm a U.S. immigration lawyer and the founder of Ashoori Law. As an immigration lawyer, I help families, professionals, investors, and entrepreneurs get visas, green cards, and citizenship to the United States.  If you have any questions, feel free to call or text +1-818-741-1117 or request  a free consultation by clicking this link. I’m a U.S. immigration lawyer and I help families, professionals, investors, and entrepreneurs get visas, green cards, and citizenship to the United States.

Since starting my law firm, I’ve helped hundreds of people from all over the world with their immigration needs. I’m very passionate, hard-working, and committed to my clients.

Got a question? Send me an email.